skip to main | skip to sidebar

Today I am sharing a Quick Page that I did in bonus lesson 1 of Jessica Sprague's Up and Running with Photoshop course. It was really quick and was the perfect follow up assignment from the first layout because there was no video for this lesson ... just a list of steps. 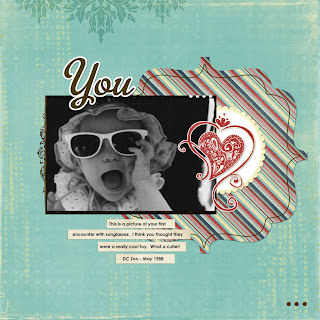 Oh, but there was a video converting the picture to black and white. I will definitely be scrapbooking this photo again though in color because Brianne's outfit (complete with matching hat) was just darling.

The journalling says:
This is a picture of your first encounter with sunglasses. I think you thought they were a really cool toy. What a cutie!! (DC Zoo - May 1988)

I love the journalling strips, but I wish there were one or two more. Well, perhaps future lessons will teach me how to add elements like that to the page. Did I mention I love that there is no mess to clean up? **grin**
Posted by Sandy at 8:00 AM No comments:

Gettin' Digi with it

I created my first digital scrapbook page from Jessica Sprague's Up and Running with Photoshop class. I purchased the class about a year ago and then discovered my laptop didn't have the minimum system requirements to run Photoshop Elements ... DUH ... pretty sad for a technology person, huh? Well, since my daughter got a Mac (I am SOOOO jealous, but very happy for her), I inherited her laptop which happens to be twice the machine of my old and faithful Dell. So now I can actually run Photoshop Elements and finally take the JS class I bought a year ago. Oh, and I can Skype too.

Anyway, here is my layout. I actually LOVE digital scrapbooking so far mainly because there is NO mess to clean up. How cool is that? 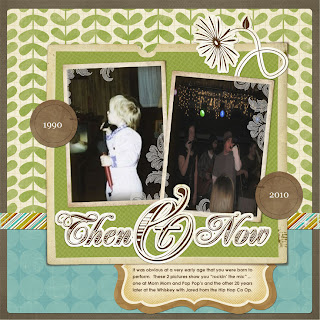 The then photo is when Brianne was about 3 years old. She is holding a toy microphone, but preferred to use the top of the railing from my parents' spiral staircase as her mic. She would always sing "Bad" from Michael Jackson and it was so adorable. She is sporting a lavendar jumpsuit her Dad got her for Christmas that year. The now photo is one of Brianne performing along side of Jared from the Hip Hop Co Op, which is the first band she belonged to.

The journalling might be hard to read, but it says:
It was obvious at a very early age that you were born to perform. These 2 pictures show you "rockin' the mic" ... one at Mom Mom and Pop Pop's and the other 20 years later at the Whiskey with Jared from the Hip Hop Co Op.
Posted by Sandy at 11:00 AM 1 comment:

Looking for some summer excitement

Sandy
Software Engineer by day, but in my spare time I am cupcake crazy crafter that enjoys baking, reading, paper crafting, and spending time with family & friends.

What I'm Up To